There is a passage of scripture that has intrigued me for years. Like many other verses, it is easy to read through it without noticing the careful choice of words used. When we look closely at these words, they become much more meaningful and life changing to us.

Then he said, “Beware! Guard against every kind of greed. Life is not measured by how much you own. Luke 12:15

First it is important to gain some context. Someone had just asked Jesus to tell his brother to divide his estate with him. Jesus answers by telling those around him to “guard against every kind of greed.” After this, he tells the parable of the rich fool. Obviously, Jesus was teaching us that we shouldn’t be greedy. We understand the gist of this and move on.

Not so fast! Let’s dig deeper for more insight.

The first thing that is interesting to me is that we don’t know which brother he was speaking about. Which one was greedy? The one who asked for part of the inheritance or the one who wouldn’t share? Jesus speaks to the heart so well. Maybe both of them needed to hear those words.

Next of interest to me is that he begins with “Beware!” or as another translation says, “Take heed!” Jesus obviously wants to share an important lesson. He is crying out to us to pay special attention and listen to His words. What is to follow is important, life changing, and will impact eternity.

Now Jesus says we should “Guard against every kind of greed.” Let’s focus on the word “guard.” Andy Stanley talks about this word in his book, “Enemies of the Heart.” The idea is similar to that of a guard on duty to protect a city. Picture a soldier posted in a tower along a protective wall surrounding a city. He is peering out into the darkness, watching for danger. It is his job to keep the enemy from entering the city and he must sound the alarm if he senses an attack. Do you actively guard your heart? Are you aware of the assaults that take place on not only your heart but also the hearts of others around you? When we are unguarded the enemy strikes undetected. We must adopt a spiritual discipline of guarding our hearts and take that job seriously.

SPECIAL NOTE TO PARENTS: To explain this further, let me tell you how this played out recently with a discussion with my oldest daughter, Brooke. She was in a bad mood and was being quite disrespectful to her family one day (which is unusual). My normal first instinct would be to give her a swift punishment of some sort to put her in her place. I had just read Andy’s book though and wondered if something was going on deeper. How was her heart? I asked Brooke if everything was ok. I told her that her choices so far that morning were not good and I wanted to know if something was making her upset. At that moment Brooke opened up to me and poured out her heart about something that had happened at school the previous day. I explained to her that her actions and behavior were not the proper way to deal with these feelings. Parents, it is our job to teach our children how to guard their hearts. When we realize this, it can dramatically affect our parenting techniques. This was a huge breakthrough for me.

The last thing I want to point out is that we are to guard ourselves from “every kind of greed.” I’ve often wondered how many kinds of greed there are. Based on this verse there are of course more than one, but what are they? Some thoughts that come to mind are:

My guess is that all of us struggle with some sort of greed. Let’s take Jesus’ advice and guard our hearts from the enemy’s temptations. Let’s be aware of all kinds of greed that exist and not let them take root in our lives. Let’s guard our families and teach them to be conscious of the their hearts as well. 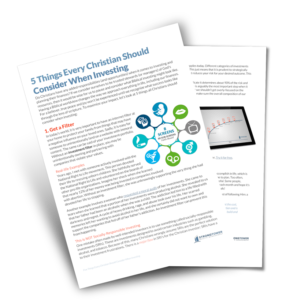 5 Things Every CHRISTIAN Should Consider When Investing

My life is so full and busy that it’s hard to sum up in a paragraph or two for a bio introduction on a website.  Obviously, you already know that I’m a financial advisor but that is just one small piece of me.  I’ve been married to my husband since 1996 and have 5, sometimes 6 children.  If that leaves you scratching your head, it’s because we opened our doors to children that needed a family to love them in 2014.  We have two biological children, have adopted 3 children, and then have what we call a “bonus child” that spends a lot of time with us.

My husband, Shane, divides his time between serving as an associate pastor at our church, chaplain for the hospital, and a dean of a small Christian college in our town.  Oh, and he helps tag team for me with the kids.

I graduated from Ouachita Baptist University in 1999 with a degree in professional accountancy.  I worked both public and private accounting for about 7 years untill I really felt a pull away from it.  Feeling a need to minister to kids, I thought teaching may be the direction to go and tried my hand at substitute teaching.  Hind sight, I’m glad the Lord shut that door and soon after opened the door to financial advising.  I got my securities licenses in 2007 and have worked with the StrongTower team ever since.

I can say that helping people with their finances and helping them set and meet their goals is something I truly enjoy.  I also work with the best people I could imagine.  Thankfully I think they like me too because I’m not going anywhere!  Good people with integrity, character, and values are hard to come by and work side by side with.  Because of that, I foresee many more years of, not only working in the financial services industry, but also working with the StrongTower team.

2017 awarded the “Best Financial Planning Company” in Hot Springs, Arkansas. This was awarded by local voters through an online survey company.

I am so blessed! God has provided me with an amazing family, a unique and fulfilling business vision, outstanding coworkers, and enriching ministry outreach.

I’ve been married to my high school sweetheart since December, 1999. Holly and I have two beautiful, intelligent, feisty, and somewhat strong-willed little girls. We are members of Crossgate Church in Hot Springs, Arkansas where we serve in a variety of roles.

I’m a finance brat since I grew up with parents in the financial services industry. Even at age 10 I was helping my dad put together old-school slides for financial seminars. As soon as I graduated from college with a degree in business management, I attained my series 7 and series 66 securities licenses. It’s hard to believe, but I’ve been in this business for over half of my life. I’m the Registered Principal for StrongTower which basically means not only do I manage investments and do financial planning for clients, but also supervise our office via a Series 24 securities license.

Beyond the business, I also love teaching what the Bible says about money. I’m blown away at how God has been willing to use us to teach good stewardship principles. He has opened the doors of churches, seminaries, marriage retreats, businesses, and more. I’ve been fortunate enough to be able to speak at over 80 different venues since 2000. We even had a radio program and TV show for many years. I have also written curriculum for the American Baptist Association and my church.

My other passion is landscape photography. There is something special about getting away from the distractions of this life to enjoy God’s creation. The art of capturing nature through the lens is somewhat therapeutic to me.

2017 awarded the “Best Financial Advisor” in Hot Springs, Arkansas. This was awarded as the Reader’s Choice Award by local voters and conducted by the Sentinel Record.

2017 awarded the “Best Financial Planning Company” in Hot Springs, Arkansas. This was awarded by local voters through an online survey company.